The July to September quarter results have shown that property market conditions are improving geometrically. According to CoreLogic, national property values experienced a 1.7% lift over this period, the highest gain since June 2017. Sydney experienced a 3.5% increase in house values over the 3 months. Mainstream media is reporting that the property market is recovering and so buyer confidence has been boosted. CoreLogic’s Head of Research Tim Lawless said “We haven’t seen growth rates in Sydney this high since early 2016 – so it’s starting to put the month-to-month growth rates close to where they were when the markets were actually racing along during the peak of the boom during the previous growth phase,” This is all very positive news.

Auction clearance rates are also up, but stock levels nationally are still 20% lower than they were a year ago and the number of auctions being held remains low relative to recent years.

As Sydney has two distinct property markets, mainstream and the prestige top 3% market, they need to be looked at separately to see whether the factors that affected the mainstream Sydney residential market also affected Sydney’s prestige real estate market.

The prestige property market in Sydney saw very few elite property sales over the last quarter with only a handful of properties trading over the $5m mark as can be seen below. The Lower North Shore performed better than the Eastern Suburbs and only one property reached double digits. In general there are less properties on the market over the winter period as people prefer to wait for Spring when their homes and gardens are presenting at their best and this year is no different. We’ll need to wait and see if more stock comes on to the market in the last quarter which represents Sydney real estate’s peak season.

The Reserve Bank reduced the cash rate by 75 basis points between June and October, meaning mortgage rates are now at their lowest level since the 1950s. Borrowing has become easier, so there is an improvement in housing affordability. 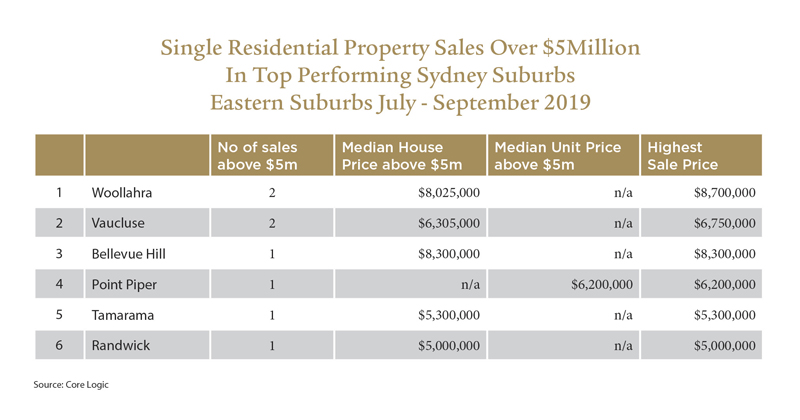 In terms of Pillinger’s results, the last quarter was very positive, with the highlights being:

We’re looking forward to seeing what this year’s peak season brings. With sales across the full spectrum at optimal levels the balance of the year remains an exciting prospect.